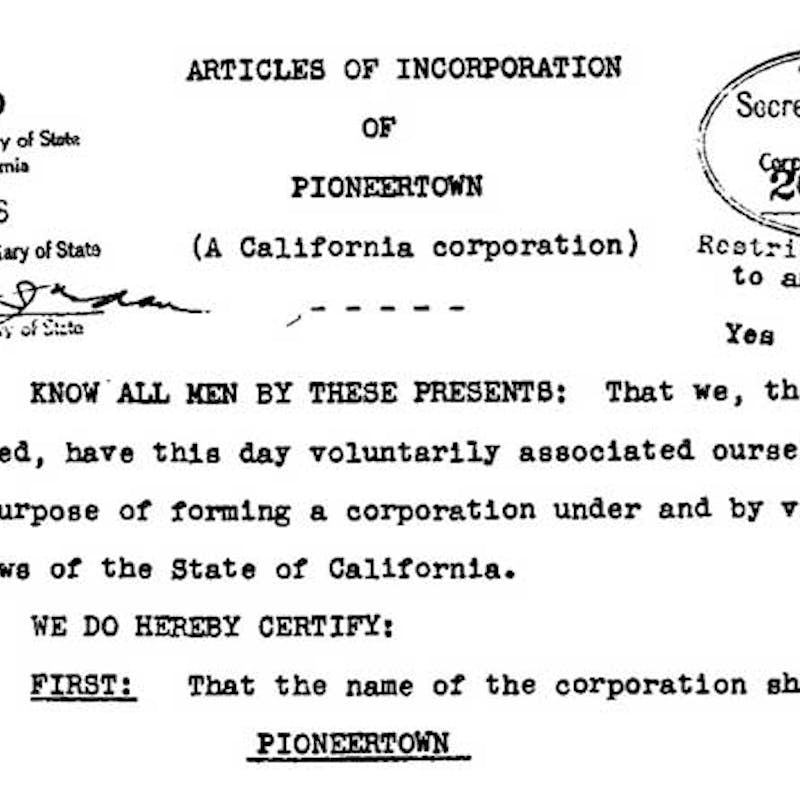 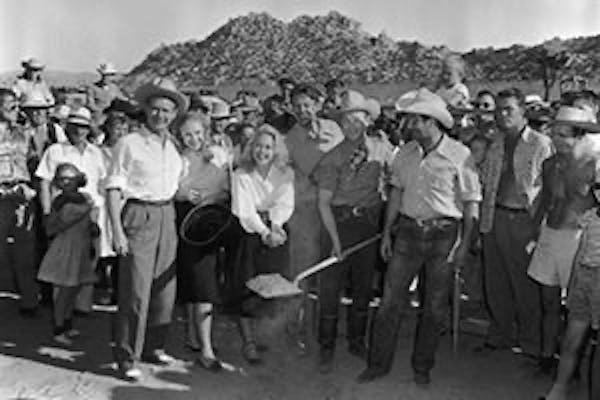 Roy Rogers, Dick Curtis, the members of the Sons of the Pioneers preside over the ground break ceremony of Pioneertown

This was a fundraiser for the one room schoolhouse that the community needed for the children. 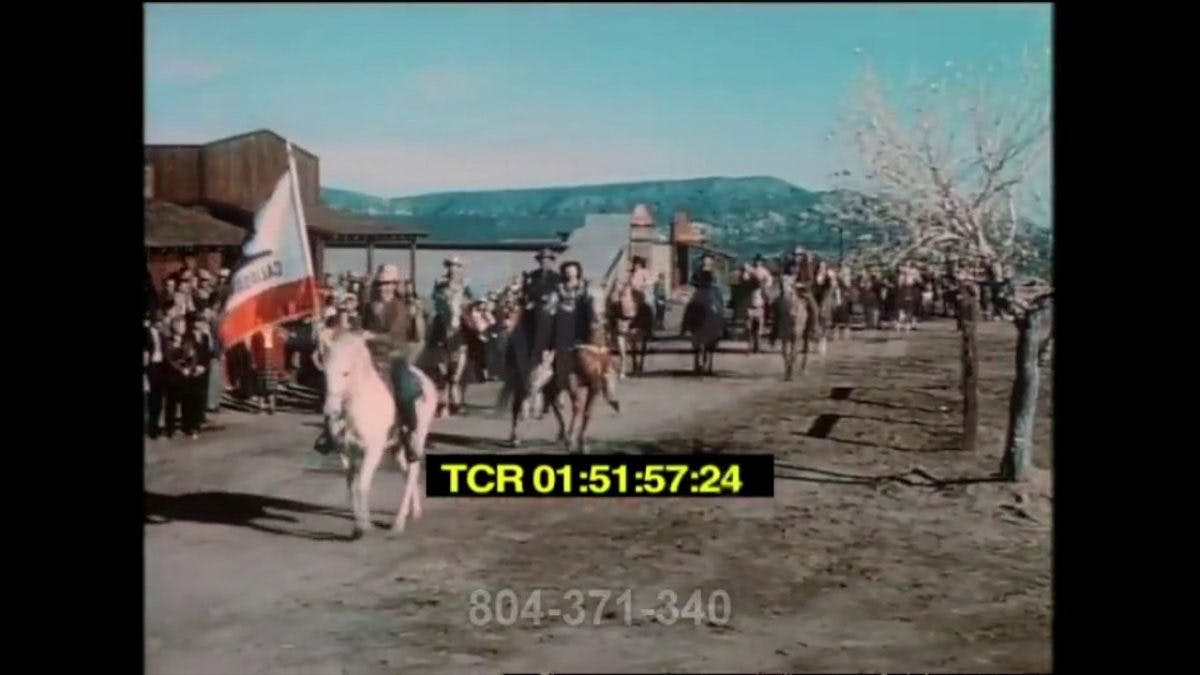 This short film introduced Pioneertown to the world and was the only time Roy Rogers, Dale Evans and Trigger were filmed in Pioneertown. 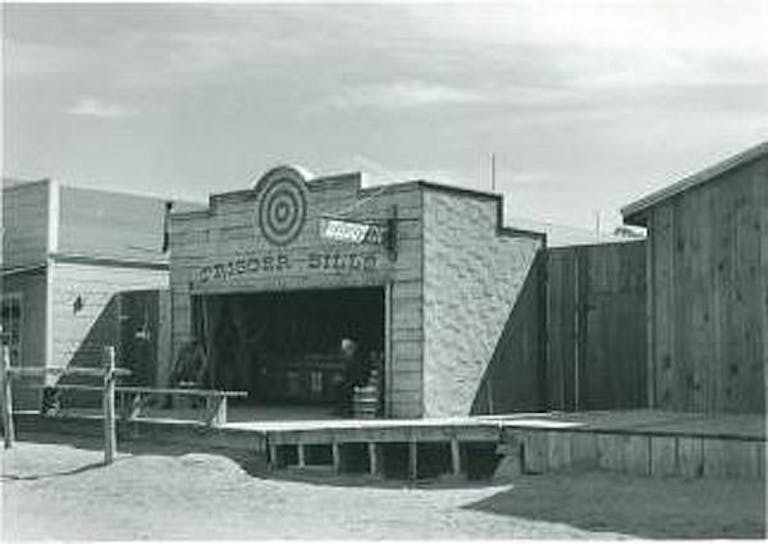 Before the fall of 1948 the only electricity in Pioneertown was on Mane Street and only while the generator was running. Everyone else was living the Pioneer lifestyle.

Darling Caballero was the first motion picture to be filmed in Pioneertown. 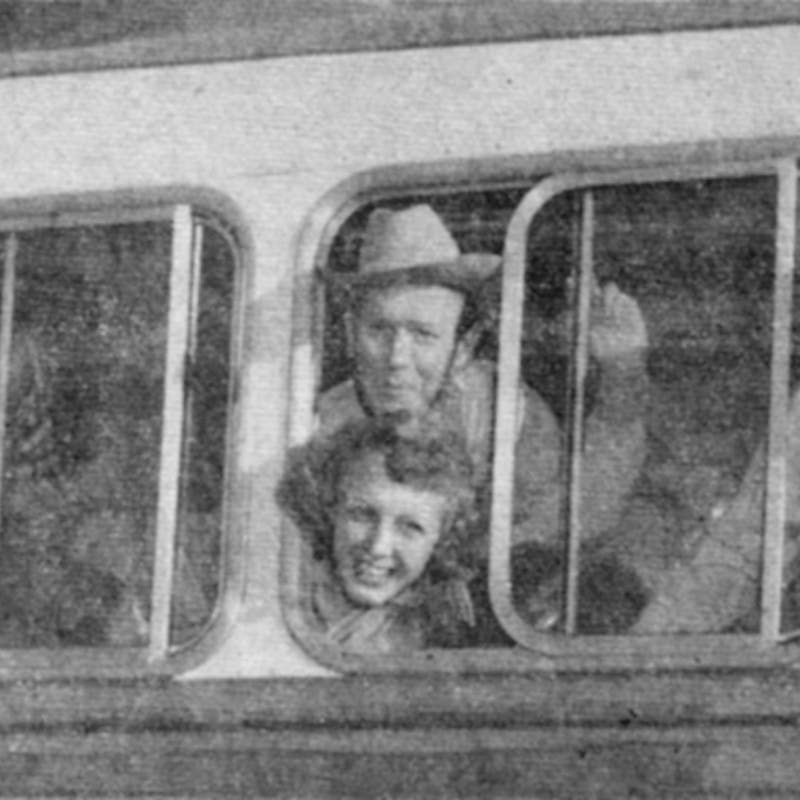 Tanner Gray Lines starts bus tours to Pioneertown. The tour package includes meals at the Golden Stallion, Horseback or Hay wagon ride through the canyon, a western barbecue and square dance. Bob Nolan and the Sons of the Pioneers preform and the Pioneer bowl holds a pre-opening event for the visitors. 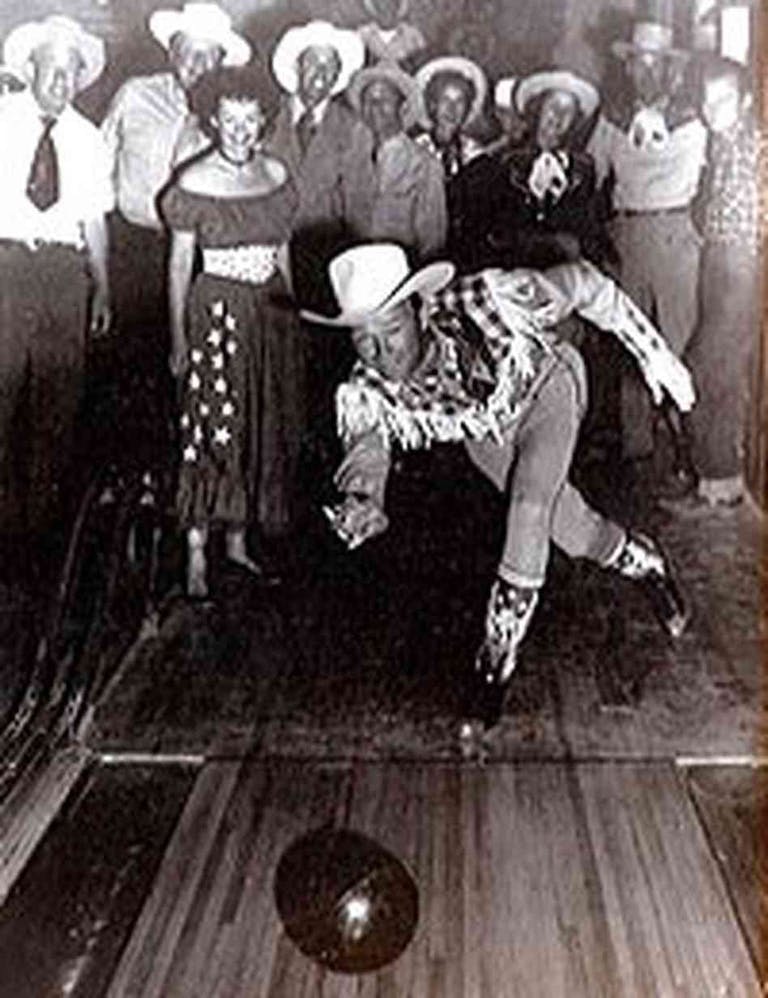 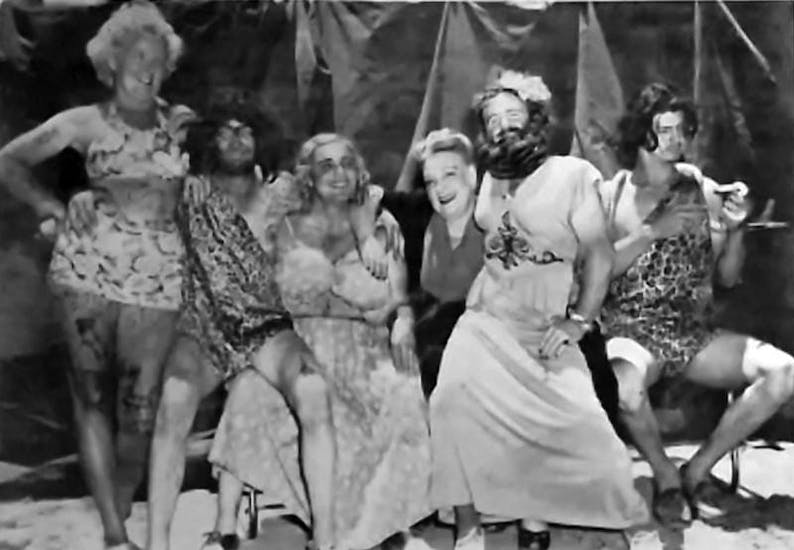 Pioneertown Inc. board members Fletcher Jones and William Murphy give notice of default on loan.

Pioneertown Up for Auction

Plans are started to create road from Pioneertown to Big Bear

In an attempt to increase tourism in Big Bear and Pioneertown, plans for a road from Pioneertown to Big Bear are re-initiated. 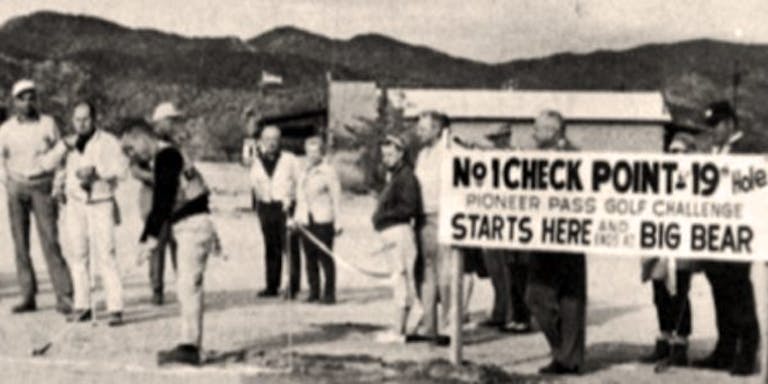 In 1947, the Pioneertown Corporation worked on promoting the Burns Canyon route. The corporation hired road crews to cut a passable road for cars and trucks through Burns Canyon from Rimrock to the Rose Mine connecting there with an existing dirt road to Baldwin Dry Lake. This was the beginning of the Pioneer Pass Road to Big Bear.

The Pioneer Pass Pushers planned an event that was … one of the most unique athletic contests in the history of golfdom,” the article said. The purpose of the event was to focus attention on the benefits and conveniences that could be derived from a paved Pioneer Pass Road between Yucca Valley and Big Bear.

A new board of directors of the in Pioneertown Corp., was announced. Following the resignation from the board of Bill Murphy, Fletcher Jones & Charles L. Nichols. 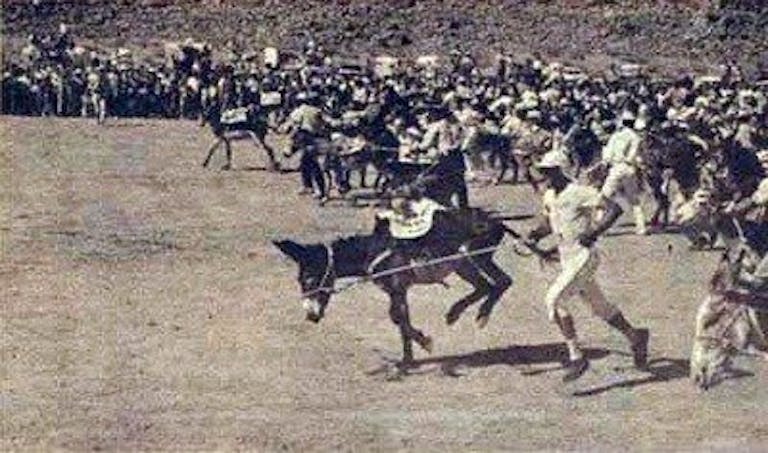 The communities of Big Bear and Pioneertown join together for a wild burro race starting in Pioneertown and ending in Big Bear. 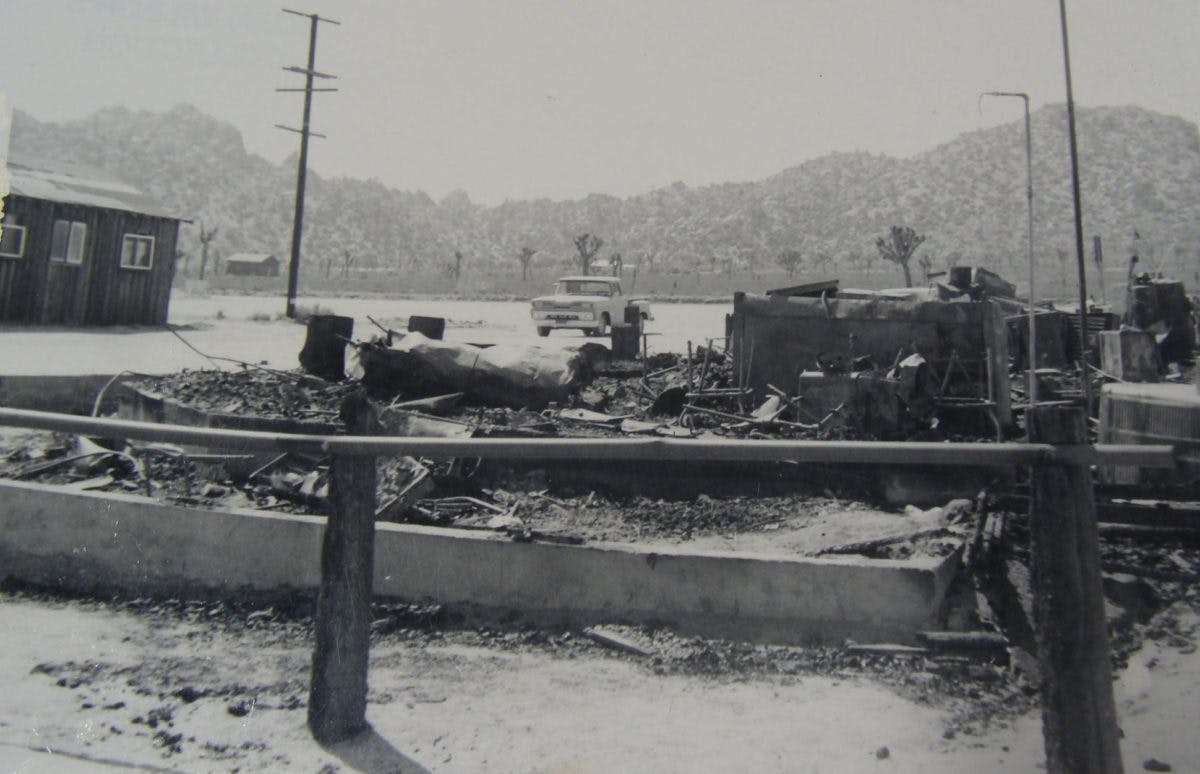 The center piece of Pioneertown life burns to the ground. 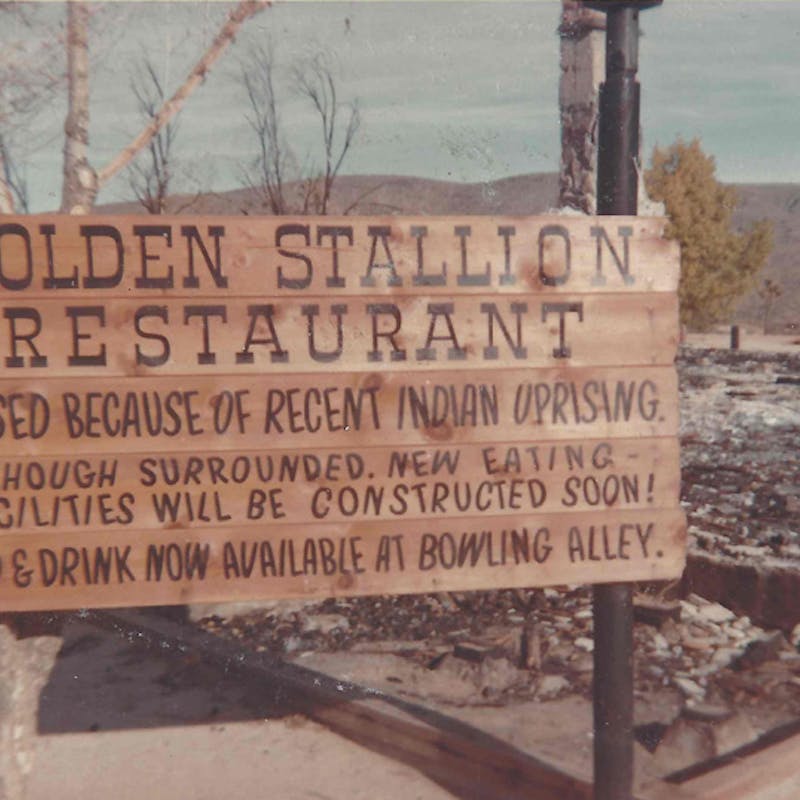 The other center piece of Pioneertown life burns to the ground and is never rebuild.